Does an inflatable surfboard need to be shaped like the hardboard, and does sharkskin embossed structure help to increase speed? These are questions asked in the Airboard® development team

When the Swiss brand showed their first inflatable SUP, at the Nuremberg Paddle show in 2008, the surfindustrie was amused about the Swiss guy’s design. At that time inflatable surfboards looked similar to hardboards. 4 inch heights was the standard – air pressures of more then 20 PSI was needed to get them fairly stiff.

Airboard, had no background in surfing but two decades of experience in building all kind of inflatable products. With that background they made the boards stiff, even at pressures of 12 PSI. The ones shaking their heads when first looking at these boards learned by surprise during the demonstration in the pool, about the stiffness and the flexibility to manoeuvre. The advantage of 6 inch drop stitch heights for inflatable SUP boards was clearly recognized.

Race boards where not in Airboards scope, as there was no surf community that asked for this.

The ambition was to build SUP boards for Switzerland, which does not even border on an ocean. The focus was on lightweight touring gliders and sturdy boards for rivers and white-water that is plenty in the alpine countries.

The new customers and fans of the brand motivated Airboard to think about speed to win competitions. What started with a cool beer, is now floating on the water – ready to set new limits.

It was analysed how some fish can stay in a strong current without moving and why they escape against the stream when disturbed. With other words it was researched how water and movement interact. The attention was put on shapes and rules found in nature. The result is a dynamic shaped SUP board with a front that splits the water sideways instead of pushing a small wave ahead. This long round shaped nose pioneers the way for the entire air-body to follow at minimal resistance.

The rocker shape also is very important. Is it to high, the effect of the dolphin nose shape is lowered, is it too flat the water washes unwantedly over the front. Depending on the bodyweight of the Athlete he will find the ideal standing point to benefit from the optimal gliding effect of this fast racer. 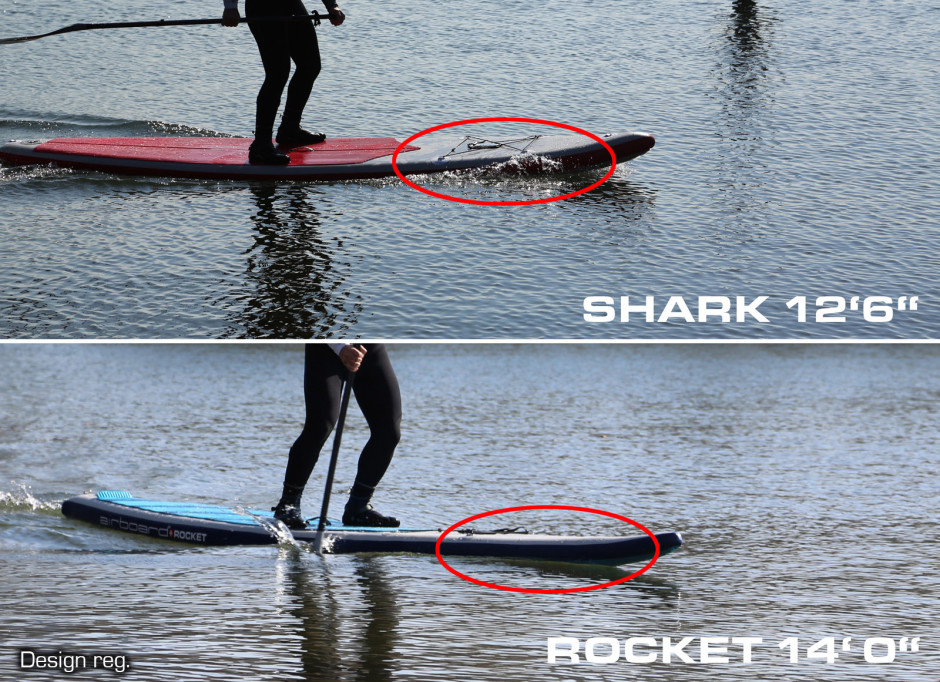 What about sharkskin embossed structures?

The idea is to create swirls underneath the SUP board that decrease adhesion, similar to a sharkskin swimsuit that proved to increase the swimmers speed. Everyone that has lifted a surfboard from still water probably felt the suction effect coming from a flat surface. Plastics can be embossed with various structures during production and depending on the structure, the gliding resistance will change. This is an enormous potential starting with the Airboard® Rocket, and we can be curious where this development can be exploit and how the competitors and market reacts to this invention.

In summer 2015, some athletes are going to be equipped with a Rocket and it will show if that is the birth of a new inflatable SUP board generation.